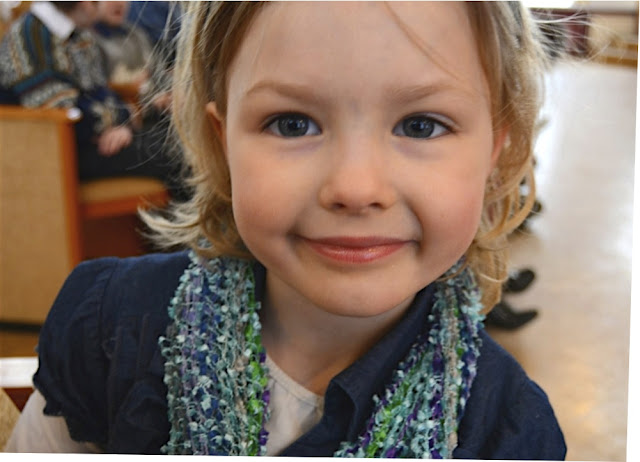 This past week Sophia and I had a Mother/Daughter outing.
Well, most of our outings are Mother/Daughter, now that I think of it . . .
This one was special.
Our Smolensk Philharmonia was hosting, “Children’s Week.”  Each day there was a concert for children.  And, best of all, the concerts were free!
Thursday, Sophia and I dressed in our “day concert best,” caught the tram, and headed to the center of town. 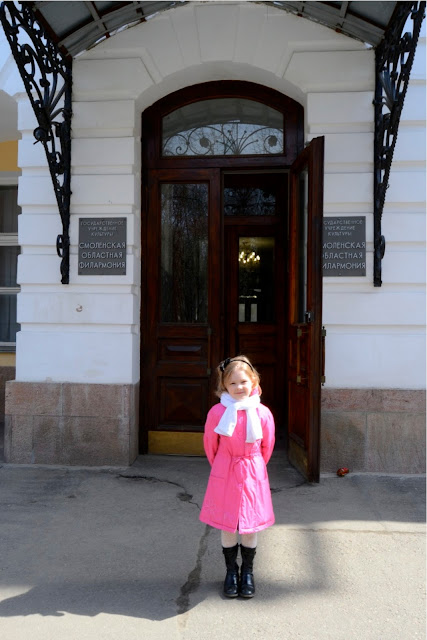 The Smolensk Oblast Philharmonia is located on the city square.  Before the Revolution, it was the noble’s meeting house. 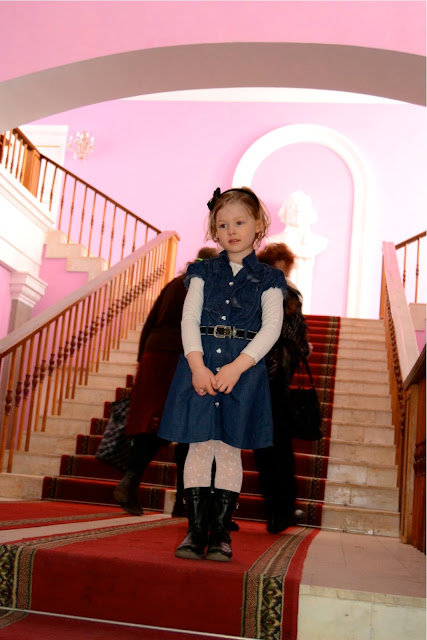 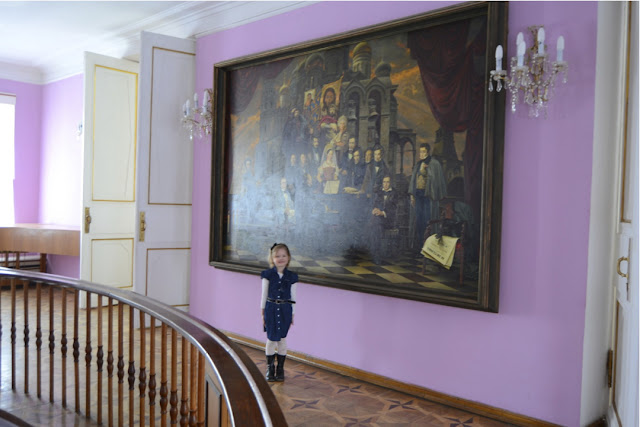 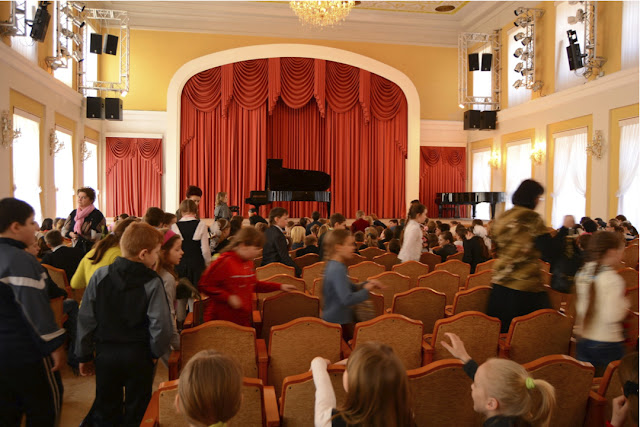 And a concert hall that is warm and bright.
It’s a room you want to stay and soak in a while. 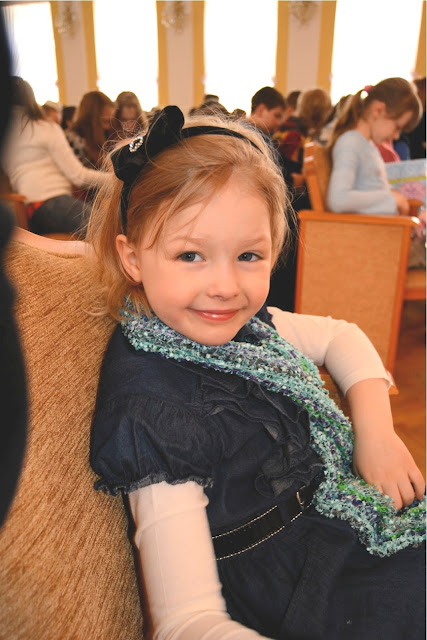 Sophi chose our seats - right on the very first row.
Ok, now for... 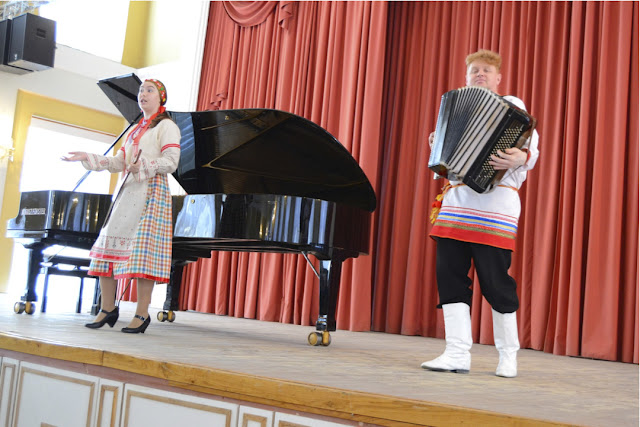 The concert started with some truly wonderful Russian folk songs.

But, you know, as with most folk music, there were some sounds that we don’t find in classical or pop music - a little more guttural or nasal.
The children giggled.
And, after the selection, some over zealous, happy-to-be-missing-class boys gave a few whistles along with the applause. 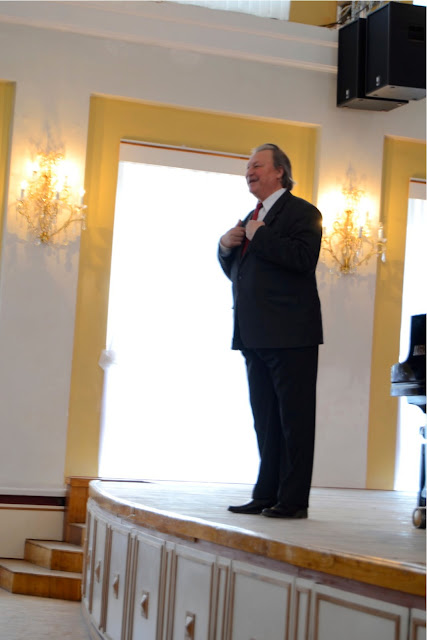 Out came the MC for the concert.
He seemed to be a very nice man . . .
if not, also, a little overly zealous.
I understand, he wanted to nip this uncultured behavior in the bud.
He wanted to use this opportunity to teach - to give those young ones some behavioral barriers.
He said:   “I like your applause.  But, that whistling has no place here.  Don’t you know who whistles?  That is what the American’s do and we all know American’s are a little crazy (and he does the “crazy sign” next to his head).  We’re Russians, we don’t want to be Americans, do we?
The crowd answers back in loud unison, “NOoooooooo!”
At this point, Sophia looks over at me with wide eyes,
“MOM, we’re Americans!”
I say, “Yes, we are!”  with my biggest smile.
See, I already had an idea.
I was  planning something wonderful. . .
Can you guess? 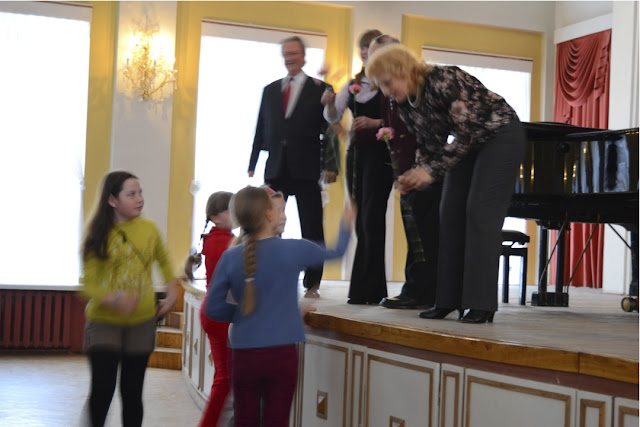 After the concert was over and flowers were given to all the composers . . .
I took Sophia up to the MC and we introduced ourselves.
ME - “Hello, thank you for the concert.  We enjoyed it very much.  I wanted to let you know that there were two Americans in your audience today.”
MC - “Well, please say HELLO to America for me.”
ME - “We live in Smolensk.  My daughter here, Sophia, is 1/2 American and 1/2 Russian.”
MC - (he just now is putting it all together . . . turns a little red, stammers a little)  He looks at Sophia and asks, “How did you like the concert?”
Sophia - “It was good.”
MC - Now, gushing all over us.  “Well, do you want to be a musician?  What instrument do you want to play?”
Sophia - “I want to sing!”
MC - “Well, you must come to me for lessons, then!  Thank you so much for coming to our concert.”
As we walked away,
he just stood there looking at us sadly,
waving his hand “Good-bye.”
Really, I meant no harm to this nice man.
I wasn’t offended in the least by his remarks.
It was just that he walked right into . . . his own personal teachable moment!
I couldn’t help myself!
“GOT’CHA!”
Sophia and I had a great Mother/Daughter outing  . . . one we will remember for a long time! 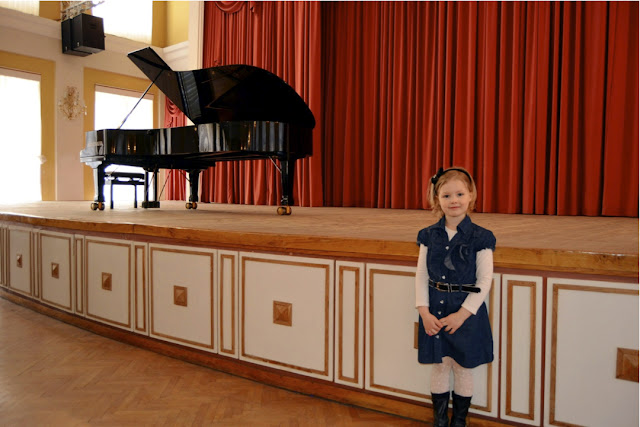 Sophia has the soul of a Russian artist - a performer.
I’m sure she’ll be on this stage someday . . .
my little Russian American!

Email ThisBlogThis!Share to TwitterShare to FacebookShare to Pinterest
Labels: Russia, The Smallest Doll