I started "prayer riding" in Longview last week.  What a blast!

I learned about "prayer walking" while living in Moscow, Russia.  I would walk neighborhoods with a small group of believers and we would pray - for the people living and working in that area.  We asked God for a spiritual awakening among the people that would bring Life and Hope and Love to the city - and that His Spirit would spread this awakening throughout the city of Moscow to greater Russia and around the world.

As I was living in the center of Moscow, I felt drawn to "prayer ride" the Garden Ring.   This ring is a series of streets that circle the heart of Moscow - the Kremlin, heart of political/gov. - the Arts District - the cultural heart of Russia.  I rode the tram or bus around the center and prayed for Moscow and Russia.  God gave me such a love for that great city and her people!

Since moving to Longview, I have felt drawn to "prayer ride" our new public transport and pray for the people of my hometown.  Well, it took 4 years, but last week I made my first ride! 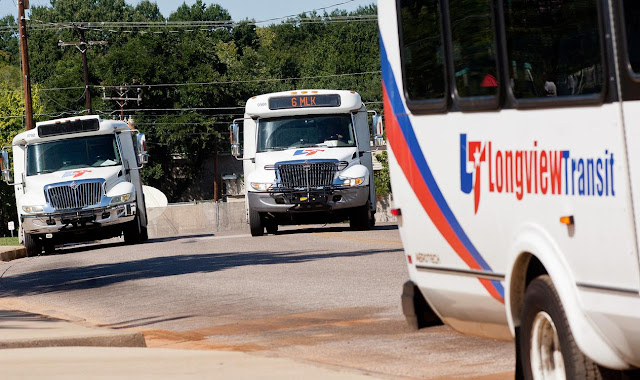 I have to admit, I was nervous . . . can you believe that?  I almost backed out.  I said, "Lord, I'm going to drive to the stop and if I don't feel comfortable, I'll just try again another time."  I parked, walked to the stop, got on the bus . . . and had a blast!  "Thank You, Lord, for Your Grace that gave me what I needed to do what I believe You wanted me to."  Friends, it is that way every time . . . just keep walking in your fear and He will give you exactly what you need.

I rode Route 1 - which just happened to have the big, really nice, "like a real city bus" bus.  I asked the driver how to pay and he was very nice and patient.  3 other people got on with me and only one joined us during the route.

I met a young lady attending Kilgore College, a young man living at Salvation Army who was riding to his job interview at Food One.  I prayed for the older man with the hip looking cap and perfectly shined shoes who slept most of his ride and the younger may with the black hoodie who kept it pulled up and kept himself in the back of the bus.  I had a great conversation with the driver and learned about his history and his fears while driving a bus in such a crazy world.

I prayed, silently, for the people in the areas we passed - some of downtown, South side, LeTourneau University, the courthouse, our downtown churches, post office, city jail.

It was such a blessing to pray!

The last 5 min or so of my ride, I was the only person on the bus so I told the driver why I rode his entire line that day.  I could see the surprise in his face and he visibly softened toward me.  As I got off the bus, he shook my hand and introduced himself to me by his first name.  He suggested I pass on my day pass to someone waiting to get on next.  I found a couple of women standing together and asked if they would be interested in using my pass for the rest of the day.  The younger one translated into Spanish what I said to the elder and she agreed.  What a blessing to pass on a little savings!

Come join me!  I'll be there this Friday!