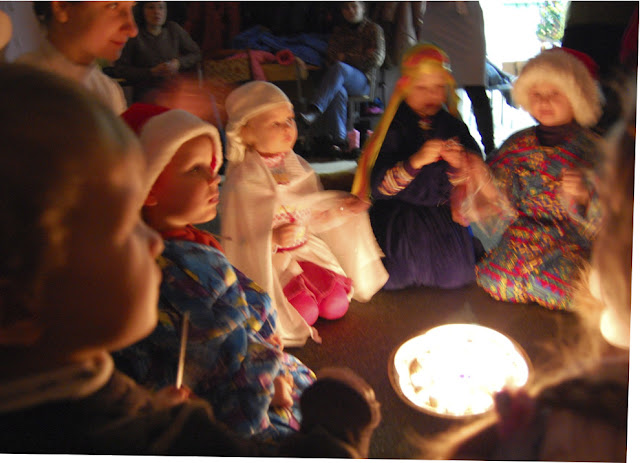 According to the “old” Julian calendar  (the one from Julius Caesar, yes, that far back)  Dec 25 is Jan 7 . . .  but only until the year 2100 . . . in that year, every thing will be on the same day again.  (ok, I admit, I don’t really get it either but it has to do with the mathematics of the calendars)
When the Catholic and Protestant world moved to the Gregorian calendar (named for one of the Popes), the Orthodox world stayed in the Julian.

Russia didn’t adopt the Gregorian calendar until 1917!
How does all this show up in modern-day Russia?

It means that, just as most Russians are recovering from the New Year’s night, it is time to celebrate Christmas.

So, as New Year’s is an after-thought to those of us in the West, Christmas is a blip on the end of a long, eventful week-off for most Russians.   Some may have another special meal, even fewer may attend a midnight Orthodox service - most do nothing.
Our family is blessed to be a part of a small group of Orthodox and Protestant Russian Christians in this country.  And, we as a group, celebrate Christmas on Jan 7th as the birth of Jesus, God in Flesh, the Savior of the World!  How I thank God for my Brothers and Sisters here!
Sophia had two Christmas parties this year - the first one was with Mom’s Day Out: 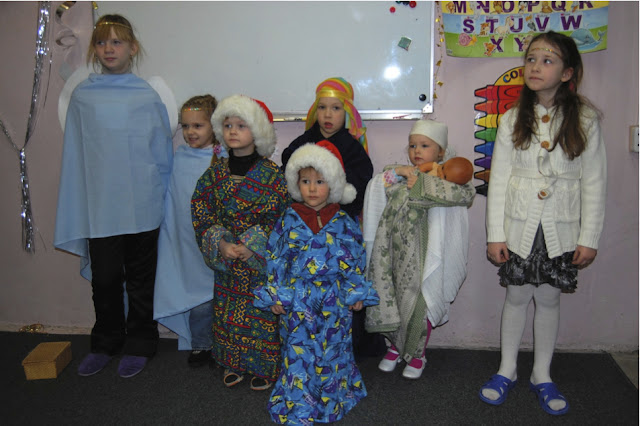 Sophia got to play “Mary” in the Christmas play!  She practiced holding Jesus, with a look of quiet dignity and love, every day for a week!

She told Roma, “Joseph,” that they were married and he was her husband now! 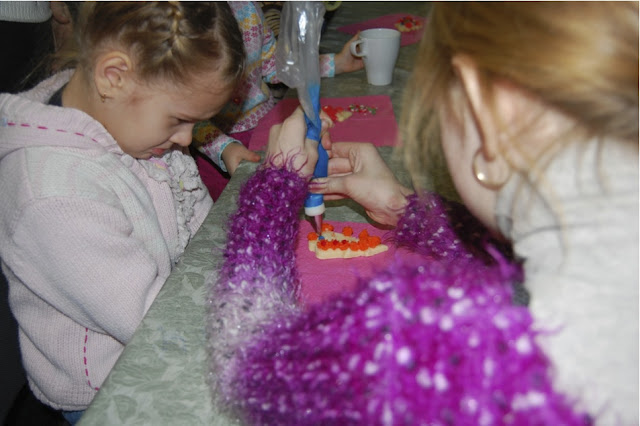 We decorated Christmas cookies . . . and, of course, ate them! 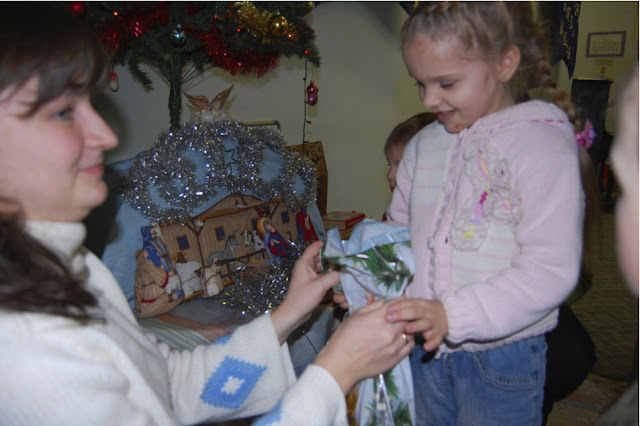 Each child received a present from under the tree! 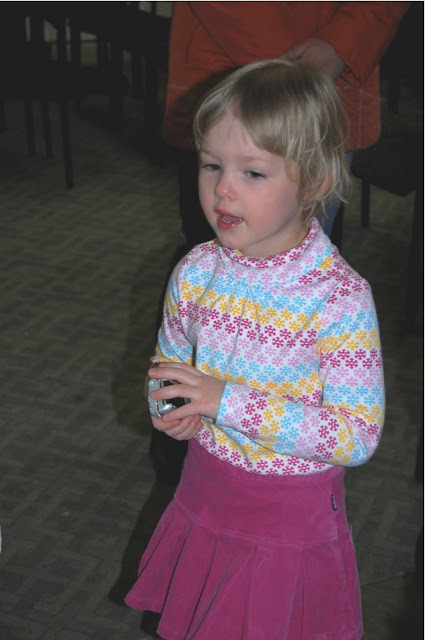 But, first, according to Russian tradition, each child should do something to “earn” the gift.
Some said a poem, quoted a verse from the Bible, or sang a song.
Sophia sang, “Silent Night.”
Made me so happy to see her sing with such sincerity!

The next Christmas Party was at our local church: 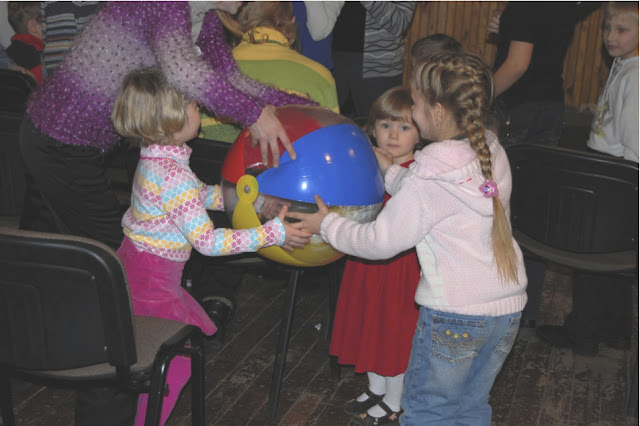 The children played games . . .
Watched a cartoon about the birth of Jesus . . . 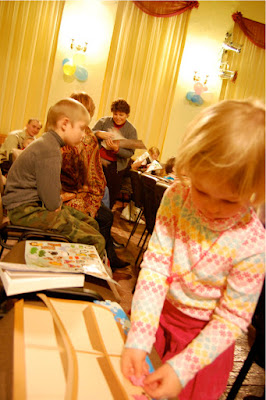 Made a craft . . .
And each child got a gift, in an American stocking, delivered by an elf! 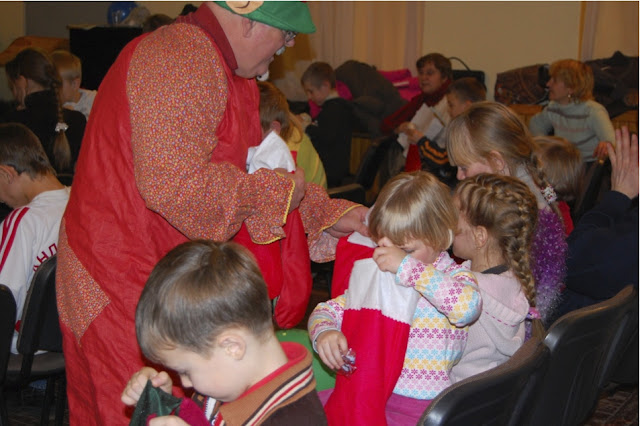 Sophia made friends with this elf and the whole group of Americans who come every year at this time to serve and love orphans in our area.  They also love on our church children, for which, I’m thankful!  They were amazed to hear Sophi speak English and soon became her good friends. 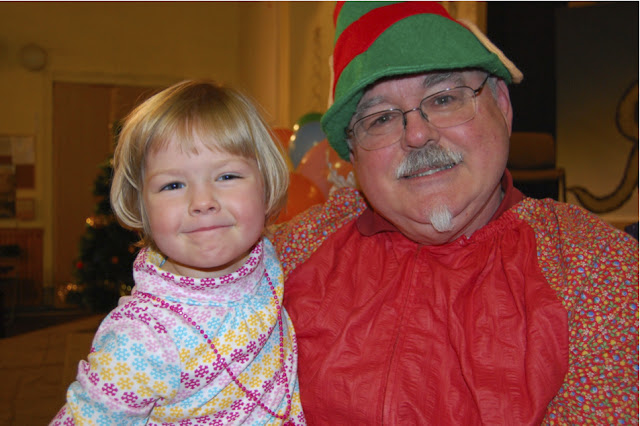 Speaking of friends . . .  here is Sophi and her friend, Dasha.  Dasha’s papa, Andrey, has an amazing story about how God found him and changed him.  Some day I’ll do an interview with him for you all! 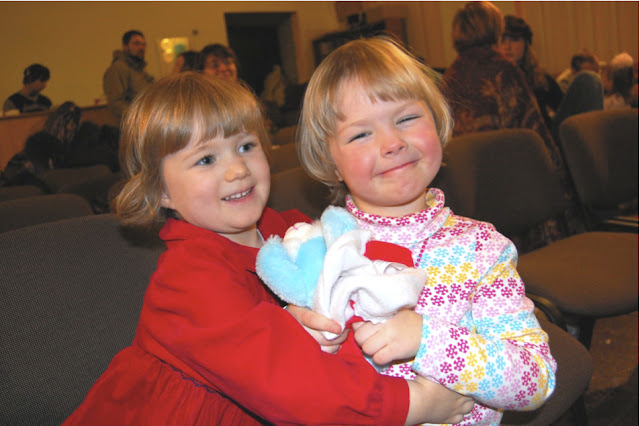 And here are all the children with their stockings! 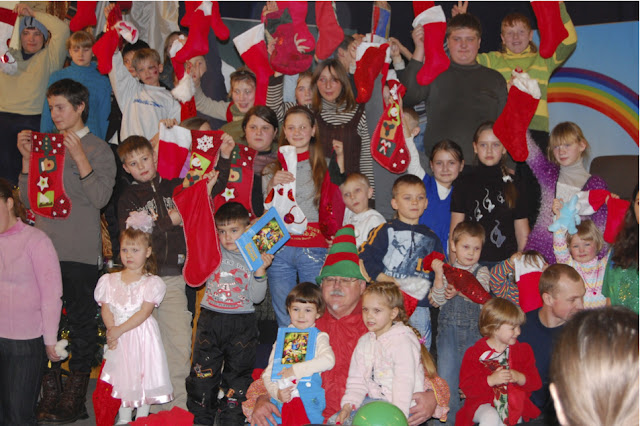 I don’t have photos, but Anton and I attended a one-woman play put on by one of the actresses from our local theatre.   It was a series of Bible stories - from Genesis to the Resurrection - all parts and narration done by this one woman. It was wonderful!
Our church had a special service on Christmas day and I had the privilege of singing beautiful Christmas carols with our choir, in Russian!  (some day I hope to post a video of our singing!)
I am thankful to God that we are a part of His Family and that our daughter is growing up among a group of people who Love Him and want to know Him more.
Christmas is God’s Gift of Love - what a blessing to be included in that Love and to share that Love here in Smolensk, Russia!
Thank you so much for your prayer for all of us here!