The Story of Our House, Part Two - “The Land Auction”

God gave us the money - now, we asked God to show us the land!
Where should we build?
We visited many areas around Smolensk, looking for just the right spot.
Anton and one of his bike buddies, Dima, agreed to start looking together.  Dima came upon a village, not far from Smolensk, that was going to be auctioning off some good-sized plots.  We went to look at what we thought were the plots and were elated - they were set up on a hill, with a magnificent view of Smolensk in the distance.  We fell in love and decided to pursue the plots.
After some research, we discovered that those were not the actual plots to be auctioned.  The plots were not far from where we looked - but instead of the excellent view of Smolensk, they had an excellent view of the graveyard across the road!
Still there were lots of pluses for these plots:
1 - There were 4 plots to be auctioned off together.  They were all on the same village “road” and there were no other houses around this area.  We would all be living on the same “new” street.  Dima wanted to buy 2 plots, Dima’s brother wanted a plot, and we would have one.  We would be living near friends.
2 - The village was only about a 10 min drive by car from the city.  It was located right off the main loop around Smolensk.  It was not far from the interstate to Moscow.
3 - The plots were only about a 3 min walk from a bus stop.  Buses stopped there daily going to and from Smolensk.
4 - There was a nice “feeling” about the land.  And, even though we would be living across from a cemetery, the view was peaceful - and no one would ever build large, ugly concrete buildings over there!
5 - The village had electricity, water and gas!  BIG PLUSES!
6 - The people we met on our frequent visits were very nice and helpful.
7 - Directly across the village road from our plots was a large pond.  It would be nice to fix it up someday as a place to walk, sit, fish, rest.  And, no one would ever build a house there!
So, with all the pluses, we decided to register for the land auction. 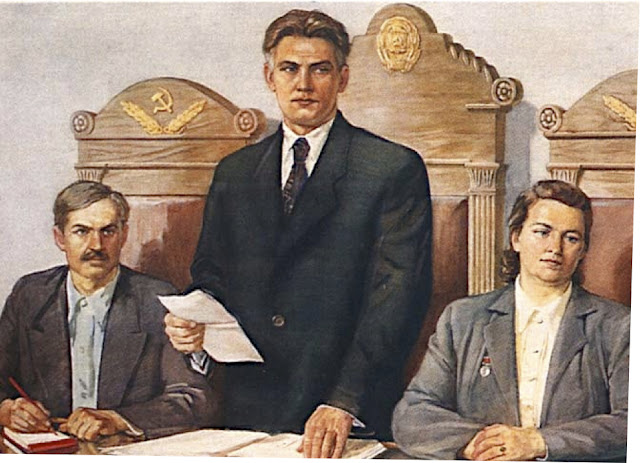 The LAND AUCTION
The very thought of an auction scared us.  We pictured a large room, lots of potential buyers sitting on the edges of their velvet chairs, holding paddles in the ready position . . . intense bidding and counter-bidding  . . . until prices were astronomical and way out of our range.
We had a concrete sum of money that God had given us.  We could not survive any bidding war.
Anton and Dima went to register for the auction - only to find out that the auction had just taken place!  No warning, no advertising . . .
BUT, no one had shown up (DUH, wonder WHY!?) so, in a month, the auction would be held again.
They also found out that the starting price was EXACTLY the amount we had.
“Ok, ok, this could be good - and bad,”  we told ourselves.

Good - because no one showed up at the last one, so maybe no one else is interested and we’ll get it for the asking price.  But, why is no one else interested?  Is there something we don’t know about this land/village? (oh, wait, I’m still in the “good” paragraph - let’s move on to the “bad”)
Bad - because, well, there is time now for others to find out about the auction and come to bid.  One bid over us and we’re out, that’s it.  Also, what is with all the secrecy?  Do they have an “inside guy” that wants the land and they are helping him by keeping it quiet?
Again, absolutely helpless to do anything else, we went to God.
“Father, You see and You know.  All that You gave us we are willing to spend and we don’t have a kopeck more.  If it is your will, please keep anyone else from coming and starting a bidding war.  If this is the land you have for us, please give it to us.”
And, so, on Dec 11, 2009, Anton and Dima went to the Land Auction.  I wish I could have been there to see . . .
They entered the room with their auction tickets.  There was a large table with 3 or 4 people sitting behind it - all land officials - behind their heads was a large photo of the President of Russia.  Anton and Dima were the only other people in the room.  The officials waited a bit and, then, started the auction.
When it came time to bid for the plot we wanted, Anton bid - SOLD!
Then, Dima bid on the rest - SOLD!
And, that my dear friends, was that.
God gave us a piece of land in Selifonova, Russia!
And, He gave it to us exactly on our 3rd wedding anniversary.
God gives the BEST gifts!
So, here, we’ll place

Email ThisBlogThis!Share to TwitterShare to FacebookShare to Pinterest
Labels: Our Russian House, Russia