Happy New Year or “Who said eating after 6pm was bad for you?" 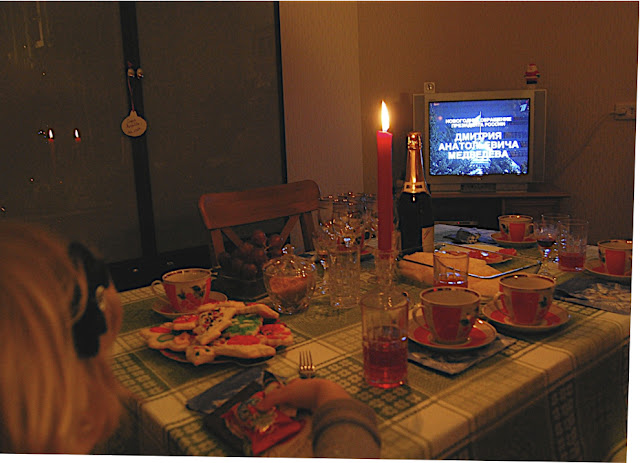 I have celebrated 10 “New Year’s” in Russia.
(Good Night!  Did I just type that?  Unbelievable!)
I can’t say that they have all been the same, but they have certainly been similar - all have involved late-night eating before a television set!
New Year’s is the biggest holiday of the Russian year.  It has traditionally been celebrated even before the Soviet Union, but became the great national holiday under the communist government.  The first years after the Revolution it was banned and, then brought back, as a substitute for the Christmas celebration.  Many of the traditions we know of as Christmas practices, Russians think of in combination with New Year’s Eve.
Every year, since becoming a member of the Yastrebov family, I have celebrated the New Year with my in-law’s, in their apartment in Smolensk.  Little changed in those 4 years - we are a people of tradition!
Let me share with you our 2009-2010 New Year's  . . . .
It officially started the week before.
My in-laws put up their New Year tree, my mom-in-law went shopping, started cooking and baking, and we wrapped all the presents we would take to my in-laws’ on New Year’s Eve.
Anton and my father-in-law worked a half-day on the 31st.  Anton came home, had a snack, and, at around 8pm we got ready to go to his parent's apartment to see in the New Year! 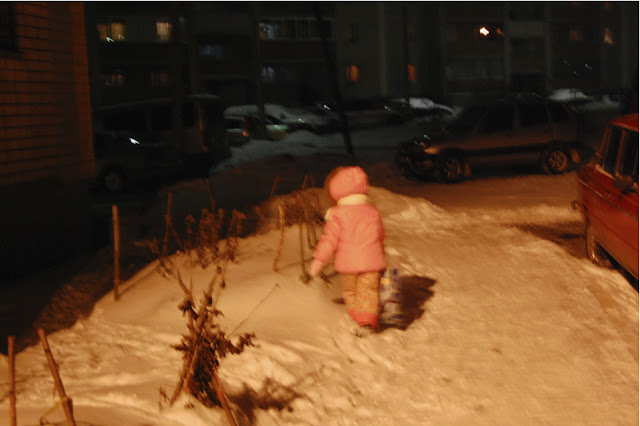 Here is Sophia walking to the car New Year’s night - on our way! 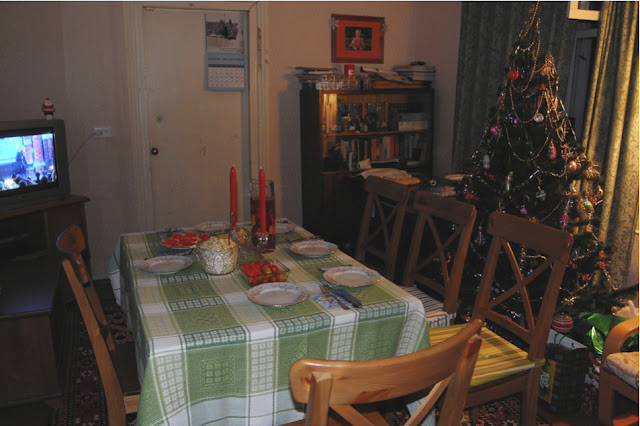 When we arrived at my in-laws’ - the table had been set, the presents were under the tree, and the TV was on.
New Year’s eve the major Russian channels have variety/song and dance programs all night - and no commercials!
Every New Years’ celebration I have ever been to at a private home - the TV has been on all night!
First thing - time to EAT!
What will we ALWAYS find on our table?  The “extra’s” may vary, but the staples never change.
Salads:

“Silotka pod Shube” translated “Herring under a Fur Coat”  - it is herring with onion, beets, and lots of mayo - and it is my husband’s absolute favorite!  (I, on the other hand, pass on this salad.)

“Oliviye” is my favorite salad - finely chopped potatoes, eggs, chicken (or ham), green peas, pickles - all covered in the much-loved mayo!  So delicious with a slice of black bread and a slice of cheese.  (This is the one I pile on top of my plate!)
Bread:
Wonderful, fresh Russian “Borodinsky” black bread (like a molasses bread - SO GOOD!)
Melt -in- your- mouth fresh white bread (baton)
Main Course:
Meat “the French way” - beef steak that has been tenderized, cooked with onions,cheese and sour cream
Boiled new potatoes
Dessert:
Chocolate cake - with jam filling
Christmas cookies - Sophi and I contributed
LOTS of Russian dark chocolate (the best in the world!)
Drink:
Russian compote - boiled fruit w/ a little sugar added
Tea
Coffee
Champagne! - at the strike of midnight! 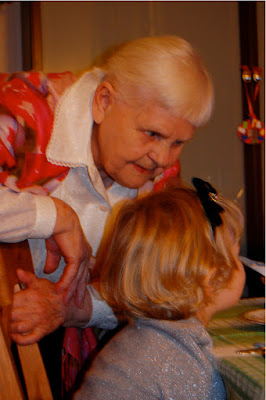 As soon as the food is all ready (around 10 pm), Babushka Valya (Anton’s grandmother, Sophi’s Great Grandmother) comes from her room and we all sit down to eat.  We eat, talk, watch TV . . . slowly, savoring each course.

Just before midnight, the President comes on TV to congratulate the country - the clock strikes 12  - corks are popped and fireworks go off - all over this great country! 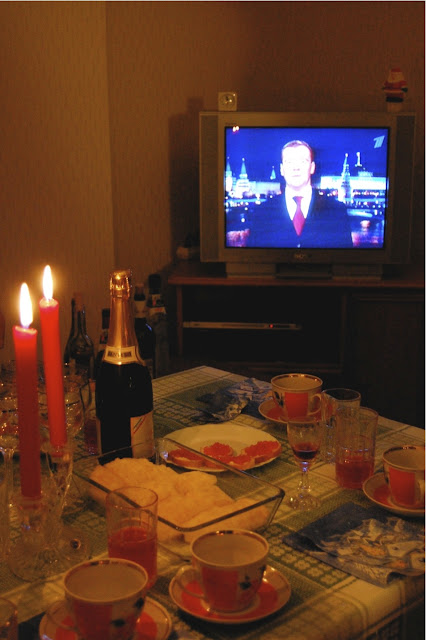 Next, and what Sophi has been waiting all night for . . . “Ded Marose/Grandfather Frost” comes!  Some families have a member dress the part and pass out gifts, some hire a “Grandfather Frost and Snow Maiden” to pass out gifts, and sometimes . . . in some families (like ours), the gifts just magically appear under the tree!
And, what was a leisurely family meal becomes a child’s dance! 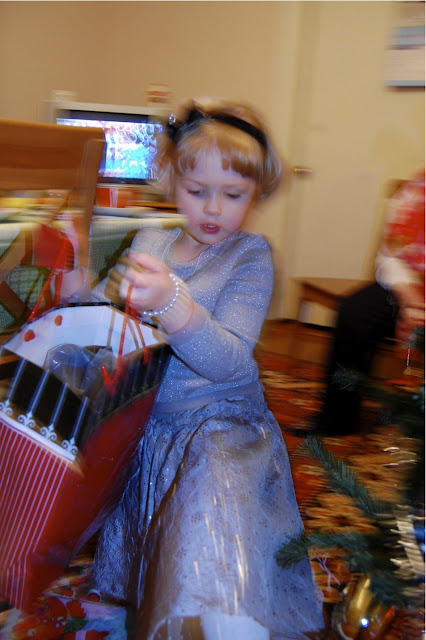 And, little girls, all dressed up, twirl in a blaze of light - passing out packages . . . 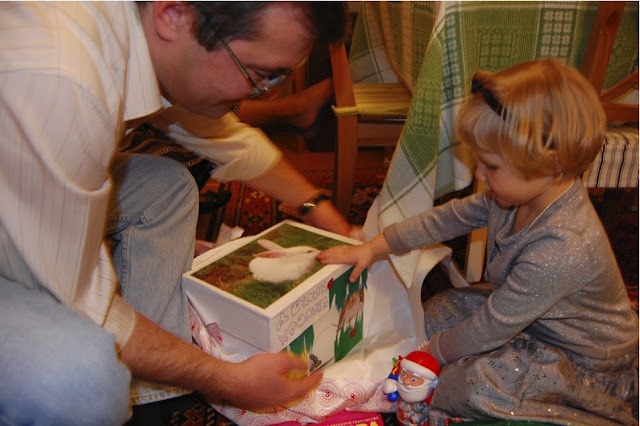 Because maybe there’s a new, stuffed “like real” bunny (just like Velveteen Rabbit) under there - and maybe it has it’s own special house that Dedushka made! 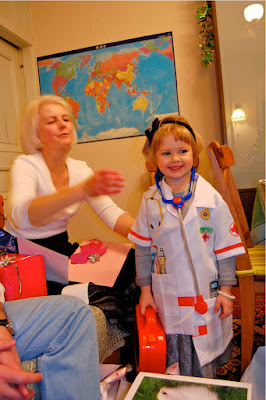 And, just MAYBE there is a doctor’s kit, with a doctor’s smock . . . just like the little girl dreamed of!


But, soon, the dance and dancer lose energy.
2 o’clock in the morning silliness sets in ... 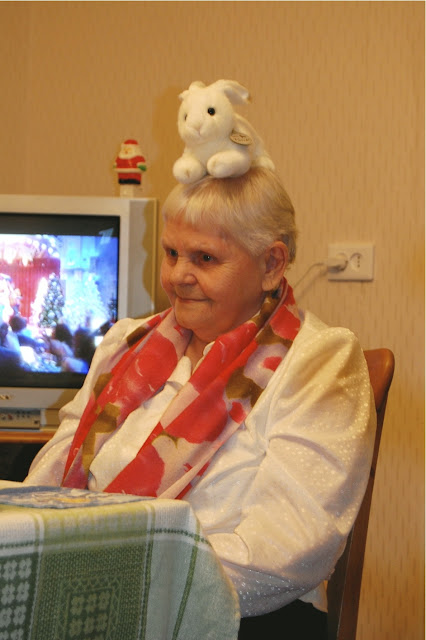